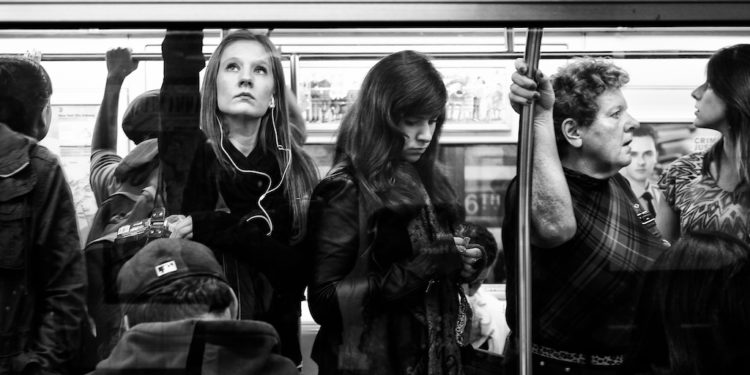 I wasn’t initially much in the mood for conversation. In fact, I wasn’t much in the mood for anything. I had had a terrible day. In New York City, the notion that initially struck me was that at any given moment, it could entirely possibly become the norm, which the endless potential for things to go to shit real fast- will and could.

Though it is the attitude of the mind that determination.I was in the latter type of mindset on the F train headed to Queens, around 10 p.m., just honestly trying to wrap up a long day. The standard fluorescent lights lit up the train as usual in the typical unflattering fashion.

Stoned-faced and heavy from the day in heels, I was not trying to have a conversation. Though the lady who sat down next to me, unconsciously and with a token of endearment attempted to change my mind, on more than one attempt. A single mother, from the Dominican Republic, spoke of life with passion and what it meant to be happy in the ever-changing culture of New York City.

A freakishly close JoLo look alike, we initially connected on whether or not she used Urban Decay eyeshadow. "Are you sure?" I asked. "Because it looks a lot like the same Urban Decay palette I once had." She nodded, telling me her 14-year-old daughter, a dancer used this type.

The eyeshadow marked her high brows the same way Jo Lo’s brow would, as such there was a friendly hello and then with little notice- a direct segue into women’s product behind the conversation about culture in New York.

Like, for example, if New Yorkers pride themselves on the number of years they have in New York, then how long do you have to live to be considered a "real" New Yorker? How do we compare regarding the rest of the US? D.C.

Cant be the capital of the U.S., New York is obviously the hottest capital. I mean, c’mon the city never takes a flipping blink! I asked what she does for work. "Assistant articles." A what?" I asked, wrinkling my nose, unable to comprehend a single word she had just said. "airtiles".

My mind could register sounds and the general vowels, but did an auto-race. More silence."Atitant airtiles". I wore a blank face. Silence continued. She didn’t seem to mind though as she patiently repeated herself a fourth time. Clear as day this time.

"Hairstylist." "Assistant hair stylist!" I exclaimed, a little too loudly. Quite the small victory. Vanessa Infante, an assistant hairstylist and a single mother of two. Originally from the Dominican Republic, Infante has lived in New York City since 1993.

Riding the F train, she slowly started to completely cheer me up as we talked about what has changed in New York since then. "Before 1993, there weren’t so many people in New York. On the train, you could sit down and have a seat, and, you know, be comfortable." She said not with with animosity but sincerity.

"Another thing, I remember the metro card used to be seventy-five cents, it was a gold coin, a very golden coin – with a hole in the middle. She told me this as though it were all a fond memory.
So what else makes you happy in New York? I asked. What makes you happy to live here?

And then I paused and asked with a slight panic, "Wait, did we pass 65th street?" She reassured me that we didn’t. Leading me to ask, "Well, will the continues change in culture be for the better? Etc.

"If you get to New York and if you know how to take the opportunities that the city offers you, you will be great. She said this with the only kind of conviction that could be earned. "You are going to be able to do everything that you want, and do everything you have ever dreamed of."

"It is an awesome city. It has something – for everybody." Her one piece of warning was: "Don’t waste time, if you do, you’re dead." Aware of the next stop ahead, she wrapped up her thoughts on a positive note."But if you come here, and you take advantage of the opportunities here, you are going do whatever you want, whatever you want."