The Ultimate Vaper Guide to Dating 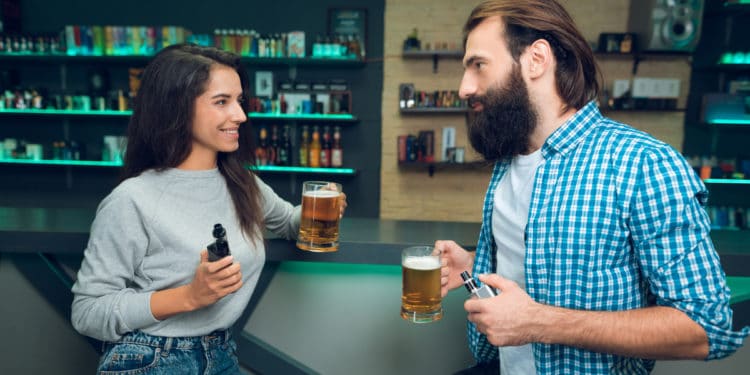 When you have a spark with someone who is a vaper, there are certain things to know so the relationship doesn’t go up in smoke.

Vaping is becoming much more popular, so there’s a good chance your new love interest partakes in it (even if they haven’t revealed that little detail yet.) However, it doesn’t have to be mysterious or scary to date someone who vapes.

Many people who turn to vaping did so to end their rocky relationship with cigarettes. The good news is that vaping might lower their chance of relapsing into cigarette use.

So that means if you smoke, you can probably expect a certain level of pressure from your new squeeze about embracing a vape kit like a SMOK Alien instead.

Your new honey may be used to smoking wherever she pleases. After all, one of the advantages of vaping over cigarettes is that it’s not associated with the smell of tobacco smoking. So what’s the problem?

Well, perhaps you don’t want vape clouds in your car while you’re driving. But you may have to tell them that directly.

E-cigarettes rely on batteries to vaporize the e-juice inside. That means an e-cigarette needs to stay charged, just like a smartphone would. So if you’re used to plugging your phone into your car outlet, or you have a single outlet in your room, then you may have to agree to some terms before things get heated.

Many e-cigarettes can charge through a USB port, and that can present another challenge if you’re using all of your USB outlets.

Your Place Will Have Gear Everywhere

If the relationship gets to the point where one of you moves in with the other, then expect a lot of e-stuff laying around if you’re not the vaper.

There’s bottles of e-juice, spare batteries, extra vape tanks, and more that goes along with an e-cigarette. Since your vaper partner is using the e-cigarette regularly, it will likely all be laid out for easy access.

This isn’t limited to your apartment. You can also expect gear to appear in your vehicle too. Try to roll with it.

They May Freak Out if They Lose Their Gear

While some experienced vapers have spare equipment, there’s the chance they might misplace the entire e-unit or key components of it rendering it unusable.

In this case, remember that some e-juice blends contain nicotine, so they might feel a bit on edge until they find their e-cigarette or buy a new one. If the person you’re dating misplaces their gear, spend more time helping them find it than trying to avoid them.

Date a Girl Who’s a Vaper

Remember, a vaper is likely making that choice for the good of their health or those around them. Vaping doesn’t come with all of the toxic chemicals that cigarettes have, as nicotine itself is not tied to cancer.

10 Tips for Spicing up Your Relationship(both Emotional & Physical)